How to drown your sorrows in butterscotch sauce

Now that I have gone through the initial disappointment of missing out on med school next year, I needed to pick myself up, dust myself off and cook! I made a promise to myself to try new things, in particular, to try out new recipes. I had been in an annoying food rut for a while, and was becoming a little bored with my culinary repertoire. So, I decided that every week, I would find a new recipe and try it out. I love to bake and I have a massive sweet tooth, so with that in mind, I started trawling through my cookbooks and magazines to find something new that would ease my sorrow. That’s when I came across a recipe for Sticky Date Pudding with Butterscotch Sauce in the March 2009 issue of Good Taste magazine. I love sticky date pudding but have never made it before, so now was a good time as ever to have a go. The outside of the puddings ended up being a little crunchy, probably because I left them in the oven too long, but the end result was really yummy. The recipe says it makes 6 muffin sized puddings, but I used a 12-cup cupcake pan instead.

Preheat oven to 180˚C. Brush each hole in the cupcake/muffin pan with melted butter to grease. Line the bases with baking paper. To make things easier,  trace the bottom of a patty pan onto one corner of a sheet of baking paper, fold it lengthwise three times and then across four times so you end up with a square.  Then you can cut the circle you traced, to produce 12 perfect circles of baking paper to line the pan.

Mix the dates, water and bicarbonate of soda in a bowl and leave for about 10 minutes to soften. Use a fork to mash the soften dates.

Cream the butter and caster sugar with an electric beater until the mixture goes pale and creamy. Then add the eggs one at a time, ensuring that the eggs are mixed in well, before adding the next one. Fold in the mashed dates and sifted flour. 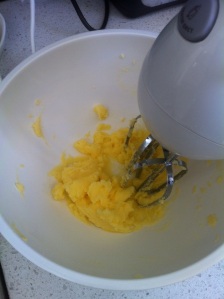 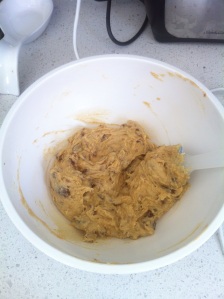 Spoon the mixture into your prepared pan and smooth out the top of each pudding. Pop the pan into the oven for about 25-30 minutes. I would keep an eye on your baking time and check about 20 minutes in so that the outside doesn’t overcook.  The puddings should spring back when you press the tops.

When you pull the pan out of the oven, leave the puddings to stand in the pan for about 5 minutes before pulling them out onto a wire rack to cool. 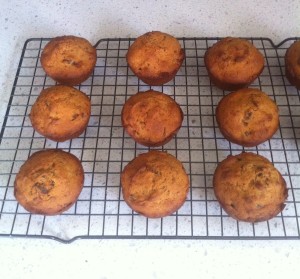 To make the butterscotch sauce, put the unsalted butter, pouring cream and brown sugar in a small saucepan. Cook this over medium heat for 5 minutes, continually stirring until smooth.

To serve, drizzle the butterscotch sauce over the puddings and top with double cream (optional). 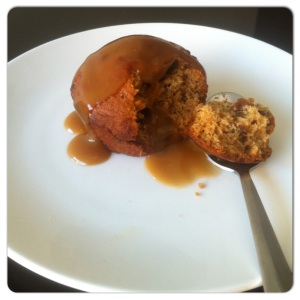 I have altered the original recipe slightly, but if you want a printable version of the orignal recipe, click here.

One thought on “How to drown your sorrows in butterscotch sauce”