Excited didn’t even describe how I felt when I made a reservation for Red Lantern on Riley Street. I had already eaten at the original Red Lantern on Crown Street in Surry Hills and was quite taken with the food there. Each dish that my friends and I had ordered reminded me so much of the food that my Mum makes. It was like being transported back to my Mum’s kitchen. That being said, I had high hopes for the Darlinghurst restaurant, which is situated on Riley Street towards the City Cross Tunnel end. The menu at each restaurant is mostly different, with a couple of dishes being the same but the Riley Street menu offers a few mid courses giving you more dishes to choose from. The interior of the restaurant is lovely with tables and chairs on one side, booths on the other and a huge long table in the middle which can seat about 14 people. A great space to invite a group of friends for a Vietnamese banquet! On this occasion, there were five of us and we were seated in one of the booths. Towards the back of the restaurant, there are windows where you can see straight through to the kitchen and watch the team making your meals. The restaurant is cosy without making you feel cramped, but is spacious enough that you don’t feel like you have to suck your stomach in, trying to squeeze yourself past other patrons if you have to get out of your seat. On this night, my friends and I (which also included my wonderful Manager from work; we were both in Sydney on a work trip) decided that we would order from the tasting menu so we could try a whole smattering of dishes rather than trying to decide which al a carte dishes to share. We chose the Hanoi Hunger which included eight (OMG!) dishes for only $65 per person. Of course, before anyone could eat, I had to take pictures…. 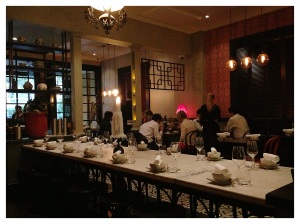 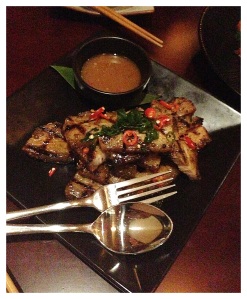 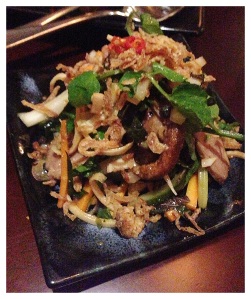 One of the girls in my group was not a seafood eater nor was she taken by the pig’s ear that was in the Goi Xoai voi Tai Heo, so the wonderful team in the kitchen gave us a couple of separate dishes to cater for my friend’s dietary requirements – without hesitation or question. Now THAT is what I call service! By the end of all eight dishes, we were so incredibly stuffed that we didn’t even have enough space for dessert (BOO!). But the food was nonetheless outstanding, and once again, very reminiscent of the dishes my Mum would make. The thing that stuck with me the most about this restaurant is that it showcases Vietnamese cuisine in an elegantly sophisticated manner. You don’t feel like you are in a stereotypical Vietnamese restaurant with large round tables, topped with a table cloth that has been bleached to death and a lazy Susan in the middle. Not that there is anything wrong with that, but it certainly doesn’t add to the ambience. I would love to take my parents to either of the Red Lantern restaurants one day, for them to experience the exceptional gastronomic experience I had.

Would I go back? Yes, in less than a heart-beat. I’m a little sad that I don’t live in Sydney because I could see these restaurants being on my regulars list. I guess I’ll just have to make more excuses to go to Sydney for work….