What is this they call Red Velvet cake?

I’ve noticed that there have been a lot of blog posts about red velvet cake lately. Apparently, this cake is the bomb. If this is true, then why have I never eaten such tasty cake before? What is this they call Red Velvet cake? Like a true researcher, I turned to Google. I had to find out what this cake is and how I could get my mitts on some. Wikipedia had a very succinct description of what this cake was all about.

A red velvet cake is a popular cake with a dark red, bright red or red-brown color. It is traditionally prepared as a layer cake topped with cream cheese icing, and sometimes cookie dough filling. The reddish colour is achieved by adding red food colouring.

OK – sounds appealing. Now to find me a recipe! Whilst trawling through the 50 bijillion recipes out there for red velvet cake, this one got my attention: Unforgettable Red Velvet Cake. I found this recipe on the blog Epicuriously, and its author, Maria, tells the tale of when she first discovered red velvet cake and her mission to find a recipe to replicate the cake that she became hooked on. Maria’s story immediately resonated with me because it sounds like something I would do; eat something totally scrumptious, then make it a mission to find the perfect recipe to replicate it at home. Looks like I found me a recipe! The one thing I noticed with Maria’s recipe that I hadn’t seen with the many others I found, was that the icing had white chocolate mixed in with the cream cheese. Even more reason to use this recipe if you ask me! Coincidently, Valentine’s Day was coming up when I found this recipe, so I bookmarked it to make my partner a cake for Valentine’s Day. I also ended up with enough batter left over to make ten cupcakes which I ended up sharing with my work colleagues the next day. So, what did I think of this cake? It was pretty good! The combination of the chocolately cake with the cream cheese icing is really nice and it’s not overly sweet either, so you could easily eat a few slices and not feel like you’re about to blast off into space on a sugar high. This recipe definitely deserves a place on my favourites list. I used two heart-shaped tins in this instance, but if you’re using round cake tins, this recipe will allow you to make a two-tiered cake for 10-12 people.

Sift together the flour, baking powder, and salt into a bowl and set aside. In a small bowl, mix the food colouring and cocoa powder to form a smooth paste and set aside. 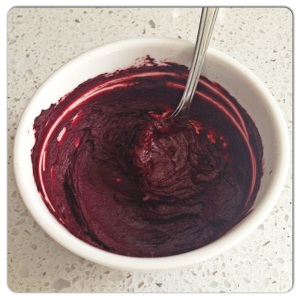 In a large bowl, using a hand mixer or stand mixer, beat the butter and sugar together until light and fluffy, about three minutes (setting 4 on the KitchenAid). Beat in eggs, one at a time, then beat in the vanilla and the red cocoa paste, scraping down the bowl as you go.

In a tall glass, mix the vinegar and baking soda together. Add the vinegar mixture to the cake batter and stir through quickly until combined.

Divide the batter equally between the two tins. I took Maria’s advice and used scales to weigh how much batter I poured into the tins, to make sure the batter was split equally. Chuck the tins into the oven and bake for approximately 25-30 minutes or until a skewer inserted into the middle comes out clean. Cool the cake in their tins on a wire rack for 10 minutes. Then turn the cakes out onto a wire rack top side down, and allow to cool completely before icing.

To make the icing, melt the white chocolate in a heat proof bowl over a saucepan of simmering water, stirring occasionally with a metal spoon. Make sure the bottom of the bowl does not touch the water. Once melted set aside to cool slightly.

In the bowl of an electric mixer with the paddle attached, beat the butter until pale yellow (setting 4 on the KitchenAid). If you don’t have a stand mixer, you can use a hand mixer. Scrape the butter into another bowl and set aside. Chuck in the cream cheese, vanilla, and salt into the mixing bowl and beat on medium-high speed (setting 6 on the KitchenAid) for about three minutes, until the mixture becomes light and smooth. 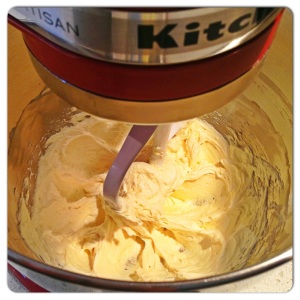 Slowly add the melted white chocolate to the cream cheese mixture and beat until the mixture is well combined.  Scrape down the bowl with a rubber spatula at least once. Add the butter and mix until just combined. Divide the icing into two equal portions.

Place the first layer of cake in the centre of whatever you are using to serve the cake, bottom side down. Take a portion of icing and scrape it out into the centre of the first layer. Working from the middle with a spatula, spread the icing towards the edges of the cake, leaving a one centimetre border – this will allow the icing to spread to the edges as the next layer of cake is placed on top without spilling over the sides.

Centre the next layer of cake and gently lay it on top of the first layer, top side down and gently press – this will push the icing to the edge of the cake. Keep an eye on how hard you’re pressing to ensure the icing doesn’t spill over the edges. Take the next portion of icing and scrape it out onto the centre of the top layer and gently spread the icing to the edges of the cake. I scattered some pink sprinkles over the top for decoration. The cake is best stored in the fridge. However, it is best eaten at room temperature. Just take the cake out of the fridge 30 minutes before serving. 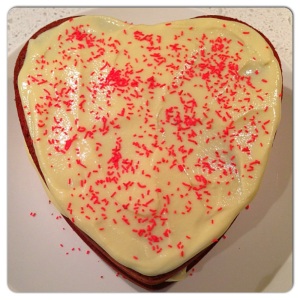 Note: Because this was the first time I had made red velvet cake, I didn’t make any amendments to Maria’a recipe. Click here, to access the original recipe. If you have left-over batter or would rather make cupcakes instead of a single cake, follow the recipe as you would for making the cake, then spoon the batter equally into a lined muffin pan and bake for about 15-20 minutes, or until a skewer inserted into the middle comes out clean. This recipe can make 20-24 cupcakes and there enough icing to go along with too.

43 thoughts on “What is this they call Red Velvet cake?”

What Jessica Baked Next
Pastry Affair

I cook meals for one