A tribute to Pappou and Yiayia

‘When it rains, it pours’, isn’t that how the saying goes? In my case, this saying certainly describes the last two months of my life. In two months, three people were taken from my world, two of which were my DBF’s grandfather and grandmother – or Pappou and Yiayia as they say in Greek. Sounds a bit excessive doesn’t it. I was surprised at how hard the loss has hit me. I mean, Pappou and Yiayia were my DBF’s grandparents, not mine; however, I still felt a great sense of loss. Upon reflection of my feelings, I began to understand why I felt the way I did. Pappou and Yiayia were the closest thing I ever had to real grandparents. My parents left Vietnam for Australia during the Vietnam War, leaving behind a lot of my family, including my grandparents. My grandfather on my Dad’s side passed away in 1996, and I didn’t get the chance to meet him, whilst I had only met my other grandparents on both sides of the family for the first time in 2001 when I traveled to Vietnam with my Mum. So, I’ve had very little contact with my family in Vietnam since I was born, not really conducive to building a close relationship. I’ve been with my DBF for over a decade now, which meant that Pappou and Yiayia have been a consistent part of my life over that time. Despite me not being the typical ‘Good Greek Girl’, Pappou and Yiayia had accepted me into the family and I had great love and affection for them (even though Pappou scared me a little). So, despite them not being my grandparents in biological terms, in my heart, they were exactly that. One of the things that I wish I did more, when I had the chance, was ask Yiayia to teach me how to cook Greek dishes. I loved Yiayia’s cooking! My favourite dish was giouvetsi, which was steak with pasta baked in the oven with a tomato based sauce – YUMMO! Pappou and Yiayia also made their own cheese and hilopites (Greek pasta), which we would get given copious amounts of. All of these things they did, to express their affection, I will miss dearly. To this end, I really wanted to try my hand at making a Greek dish as a tribute to Pappou and Yiayia. I wanted to cook a dish that I would’ve wanted to cook for them. I wanted to find a dish that was truly Greek, that wasn’t subjected to ‘interpretation’, which is not a bad thing but for this situation, I wanted something ‘traditional’. Recently, I stumbled across a George Calombaris recipe for Moussaka, which originally was his Mum’s, and thought that it fit the description perfectly and was worthy of making into a tribute dish. For those who don’t know George, he is a Greek-Australian chef who is a judge/host on the Australian series of Masterchef. I couldn’t think of a more perfect recipe. Apparently, the recipe serves 4, but with a couple of sides, I think it could easily feed 6.

Pappou and Yiayia, you will always be remembered x

In a frypan or medium saucepan, heat 1 tbs of oil over medium heat and sauté the onion, garlic, lemon thyme and rosemary until the onion is soft. Chuck in all the mince and cook until browned, using a wooden spoon or fork to break the mince up.

Add the tomato paste, cinnamon quills and crushed tomatoes. Bring to the boil and then reduce the heat to low, and simmer for 1 hour. Check the meat sauce every now and again to make sure it doesn’t dry out. If it looks a bit dry, add more crushed tomato. Season with salt to taste. 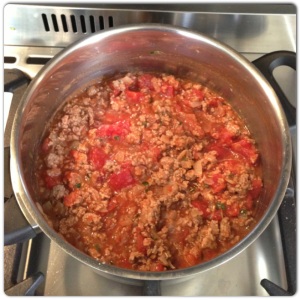 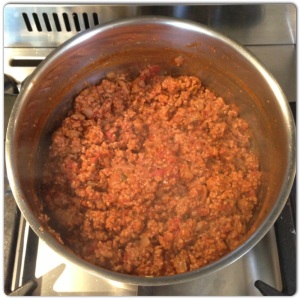 In a large frypan, heat some oil over medium-high heat. Fry the eggplant and potatoes until tender. You may find that the eggplant will soak up a bit of oil during frying, so you may need to add extra oil in between batches. Just make sure you wait until the oil has come up to temperature before adding in the eggplant/potatoes to fry. Now is a good time to preheat the oven at 200°C (fan forced).

To make the bechamel, melt the butter in a saucepan over low heat. Chuck in the flour and stir for about 2 minutes. Add the warm milk slowly whilst continuously stirring until the bechamel is thick. Remove from heat, cover with a lid and set aside to cool for about 10 minutes. Whisk in the eggs and cheese, then season with salt to taste. Kefalograviera cheese is a Greek cheese that is quite salty, so you may not even need to season it. 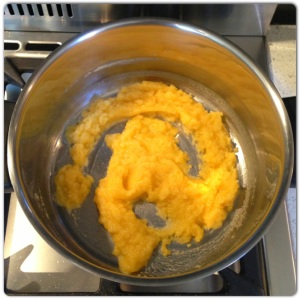 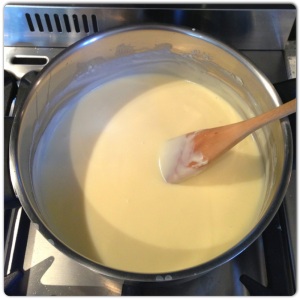 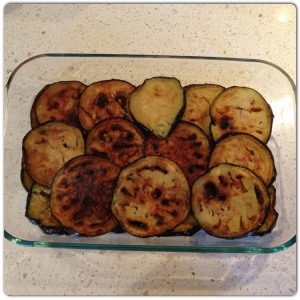 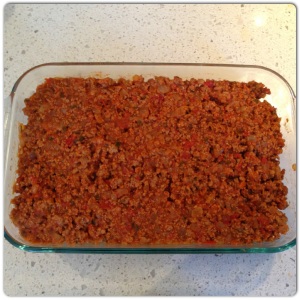 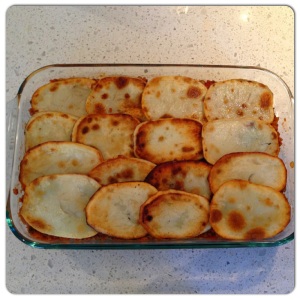 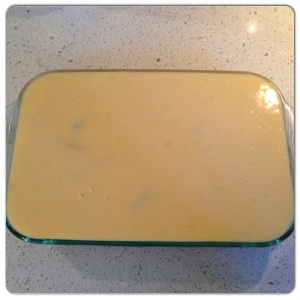 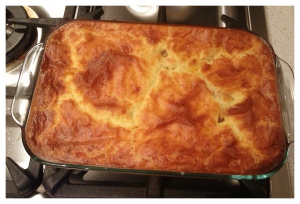 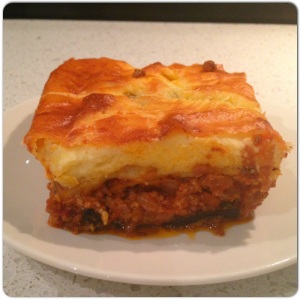 Note: I have only made small amendments to the original recipe, if you would like to see the original recipe, click here. The one thing that I was really paranoid about was not cooking the eggplant and potato enough. My DBF and his sister said that there is nothing worse than eating moussaka that has undercooked and hard eggplant and potato. You should be able to cut through it with your fork, like a lasagne. I think it helps if you keep your veggie slices thin, that way you can be sure that they are cooked through and tender.

9 thoughts on “A tribute to Pappou and Yiayia”