Being a massive Francophile and a lover of food, I’ve had a love affair with French pastries ever since my first trip to France a couple years ago. There’s something about French pastries (probably the massive amounts of butter and sugar) that immediately takes me to my happy place. *sigh* Since then, I have always wanted to do some sort of pâtisserie course but had no idea where to find one. As with everything I do, I decided to do a bit of research (I am a scientist at heart after all) to find what was available in Adelaide. I wanted something casual; no need for a recognised certificate or diploma, but I wanted to learn from a true Pâtissier. That’s when I came across Mulots Pâtisserie located just south of the CBD in the trendy suburb of Hyde Park.

Head Pâtissier, André Guérinet, emigrated to Australia with his wife in 1984 after working his way up to Executive Chef in France. In 1985, Mulots Pâtisserie opened in Hyde Park and has been providing Adelaide with wonderful authentic French patisserie products ever since. With that kind of experience, why wouldn’t I want to learn from André? Mulots Pâtisserie puts on a range of classes including macarons (this is the class I did), croissants and choux, and puff pastry to name just a few.

So, getting back to my class, it was held in the kitchen at the back of the Pâtisserie shop.  There were seven of us altogether, which was a nice number to work with considering how small the kitchen was. The class wasn’t as hands-on as I wanted, but considering the space constraints of the kitchen, the number of items on the agenda and how much time we had (the class went for 3.5 hours), there was no way you could have everyone involved in a hands-on class. We were provided with notes, which just had the ingredients listed for each item; you were to write the method yourself.  I thought this was good, because you could write what André was doing in your own words. André is an amazing instructor and explained everything succinctly. André also encouraged everyone to take pictures or video, which suited me because I wanted to share some pictures with everyone anyway. 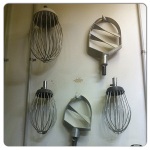 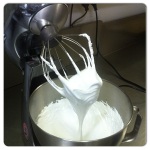 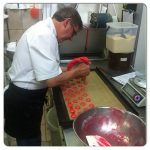 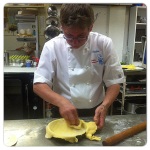 What did André make?
Macarons – pistachio and raspberry

With the tarts, André made a couple of big ones and several smaller ones, and he made about 50 macarons in total. It turns out that after the class, you are taken to the front of the shop where some tables and chairs are set up, and you get to sample what he has made. This was also a great opportunity to socialise with the other attendees and with André himself. The smaller versions of what he makes, is yours to take home. Of course, the food was absolutely devine.

What’s the deal?
Classes go for 3.5 hours and cost $120. I must admit, I initially thought it was a little pricey for a class where you are watching someone else makes things, however, André’s instruction is incredible and what happens after the class is a nice touch too. I will definitely be booking myself in for André’s other classes. If you would like to attend one of the classes, make sure you book way in advance because I was on a waiting list for two months!

What’s the score?
4/5 overall. Come to think of it, the score could’ve been influenced by André talking in his French accent *swoon* and being fed such yummy patisserie products. I am only human….